THE TALES OF HOFFMANN

An impossible quest for love, with the great voices of J. Osborn, E. Jaho and A. Vinogradov

Offenbach conjures up a world governed by rules of its own in which he places Hoffmann, a poet and composer under a curse. Hoffmann recalls his past love affairs and guides us through a universe where dreams and reality intertwine.

This opera about the misfortunes of Hoffmann, whose obsession is to triumph in love, was left unfinished by Offenbach on his death in 1880. It narrates the painful tales of his relationships with three women: the cold doll Olympia, the fragile and innocent Antonia, and Giulietta, the heartless courtesan.

Laurent Pelly has made this exquisite yet sinister production especially for the Gran Teatre del Liceu. The gloomy tale itself and its magical reverse side reflect the two facets of Romanticism, while the superb setting created by Pelly illustrates the poet's torment and the frustration aroused by his nemesis.  When the tales are over, Hoffmann longs for forgetfulness and ultimately finds consolation in his creative genius. As Louise Bourgeois, the genetrix of feminist art, reminded us: “Art is a guarantee of sanity”. A way, in other words, of curing the individual and the world.

The tales of Hoffmann 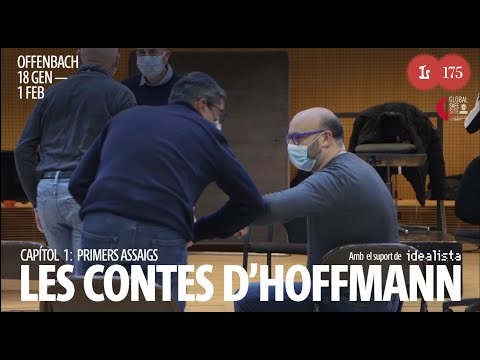